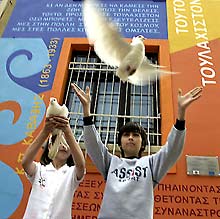 Children let doves fly as a symbol of peace and unity on the day of inauguration of a Greek poetry wall. Verses by Konstantinos Kavafis have decked a Sofia school as part of the EC-sponsored project Wall-to-Wall. Photo by Yuliana Nikolova (SNA)
Verses by Greek poet Kostantinos P. Kavafis have decked the walls of a Sofia school building as part of the Wall-to-Wall project of the European Commission.

"Even if you cannot shape your life as you want it, at least try this as much as you can", reads the poem written in the beginning of 20th century.

Kavafis is being regarded as the most outstanding figure in twentieth-century Greek poetry and his poems are considered among the most powerful in modern European literature. His Hellenistic-style verses span a bridge between the centuries and epochs characterizing ancient cultural heritage and modern letters.

Besides Greece, Sofia-based embassies of Belgium, the Netherlands, Luxembourg, Sweden and the United Kingdom have adorned public buildings in the city with pieces of their national poetry.

The Wall-to-Wall project dedicated to the signature of the EU Accession Treaty by Bulgaria on April 25 aims to promote the diversity of European languages and letters.

It is carried out by the embassies of EU Member states, the aspiring countries and the European Commission.