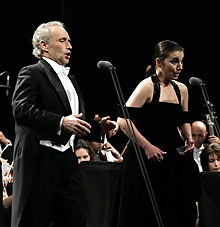 Bulgarian soprano Tsvetelina Maldzhanska (R) performed opera arias together with Jose Carreras (L). The world-famed tenor visited Bulgaria on the occasion of the Salon of Arts running in Sofia. Photo by BTA
Bulgarian melomans had the chance to enjoy the conquering voice of the of the world-famous Jose Carreras on Saturday.

The world-famed tenor presented Verdi and Puccini's pieces. Bulgaria's soprano Tsvetelina Maldzhanska, who had been personally approved by the opera star, performed together with him on the stage.

At Carreras' request there were no cameramen and only one photo reporter allowed to the concert hall.

Besides insuring the concert equipment and his team Jose Carreras insured also his audience.

The performance of Carreras here was part of the Salon of Arts program and all events in relation to the May 24 celebrations dedicated to Bulgarian letters and culture.

Carreras was born on December 5, 1946 in Barcelona, the capital of Catalonia. At eight he gave his first public performance, singing ‘La Donna e Mobile' on Spanish National Radio. At eleven, he was on the stage of Barcelona's opera house, the Gran Teatro del Liceo, singing the boy soprano role of the narrator in de Falla's El retablo de Maese Pedro.

He studied at first with Francisco Puig and later with Juan Ruax, whom he has described as his artistic father.

Since 1988, Carreras has dedicated an important part of his time and energy to the "Jose Carreras International Leukaemia Foundation". A charity he founded to raise necessary funds to fight against leukaemia.