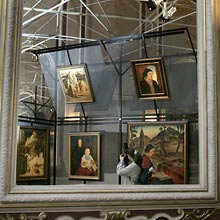 Eight of the halls of the former King's Place in Sofia, now turned into a gallery, were redecorated with new constructive elements thus creating an opportunity for showing the classic art in a modern way.

In a chronological sequence the exhibition presents the national plastic art from the beginning of the XIX century to the 1950s. The permanent exhibition includes classical examples some of which haven't been shown to the public in years.