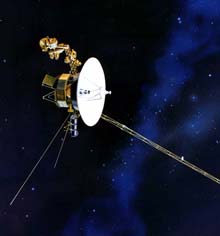 Astronomers tracking the little spaceship's 26-year journey from Earth believe Voyager 1 has gone through a region known as termination shock, some 14 billion kilometres from the Sun, and entered an area called the heliosheath.

Voyager 1 and its twin spacecraft Voyager 2 were launched in 1977 on a mission to explore the giant planets Jupiter and Saturn. The pair kept going, however, and the mission was extended.

Both Voyagers are capable of returning scientific data from a full range of instruments, with adequate electrical power and attitude control propellant to keep operating until 2020.

Wherever they go, the Voyagers each carry a golden phonograph record which bears messages from Earth, including natural sounds of surf, wind, thunder and animals.

There are also musical selections, spoken greetings in 55 languages, along with instructions and equipment on how to play the record.

One of the music pieces, which travel into open space, is the Bulgarian authentic song "Izlel e Delyu Haidutin", performed by famous folklore singer Valya Balkanska.

Beethoven, Bach, Mozart and Luis Armstrong are among the music accompanying the Bulgarian song in its long journey.