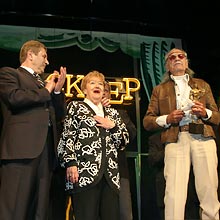 At a solemn ceremony renowned Bulgarian actress Tanya Masalitinova (C) received the Askeer 2005 award for overall creative work on theater stage. Last year’s laureate Peter Slabakov (R) handed her down the honorary statuette. Photo by K. Atanasova (SNA)
At a solemn ceremony in Sofia, Bulgarian theatre community has recognised some of its most outstanding actors and actresses by giving out the traditional Askeer awards.

The living legend of Bulgarian theatre Tanya Masalitinova received an Askeer prize for her entire work and life dedicate to the stage.

This year, for the first time in the 15-year history of the ceremony, the Askeer Foundation handed down a prize for modern Bulgarian dramaturgy. Boyan Papazov became the first laureate of this award - a volume with best plays of the year.

Boyka Velkova and Valeri Yordanov swept the honorary statuette and BGN 1,000 prize each for leading female and male performance in the Absolvent (Graduate). Recognition for supportive roles went to Irini Zhambonas and Malin Krustev.

The Askeer for best director was granted to Alexander Morfov for his wonderful work on the play Hushove (Emigrants) based the same-name novel of Bulgarian writer Ivan Vazov. The Emigrants also swept the award in best play category.

Awards were given out in a total of eleven categories, including also for debuting star, costumes, music, etc.
Society » Be a reporter: Write and send your article
Advertisement
Advertisement
Expats.bg All Are Welcome! Join Now!
More from Society