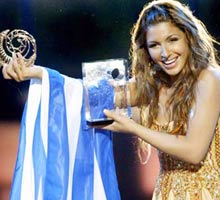 Elena Paparizou has showed persistence in bidding for the top of Europe’s most prestigious musical festival. Four years after ending third with Antique, Elena became Number One at Eurovision 2005. Photo by sky.com
The winner in Eurovision 2005 Helena Paparizou extended her gratitude to all Bulgarians and her friends in Bulgaria who supported her song at the contest's final on Saturday.

In a special letter, Paparizou expressed her love and appreciation to the boys from Kaffe, who represented Bulgaria for the first time at the prestigious musical festival in Kyiv, her Bulgarian producers from KA Music announced in a press release.

Helena Paparizou and "My Number One" garnered the crushing 230 points at the final with the maximum of 12 points awarded by televoters from Bulgaria, United Kingdom, Albania, Belgium, Cyprus, Germany, Hungary, Serbia and Montenegro, Sweden and Turkey.

Besides the title, she won for Greece the next hosting of Eurovision to be held in 2006 in Athens.
READ MORE about Helena Paparizou in For the Record section