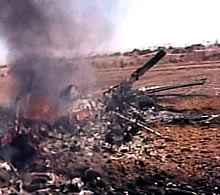 The Russian-built aircraft was flying just north of Baghdad when it was hit, possibly by a rocket-propelled grenade, world media reports. The three-member Bulgarian crew and six passengers, all civilians, were on board.

Bulgaria's Defence Ministry also announced that no Bulgarian soldiers from the country's unit in Iraq have been injured in the incident.

Earlier in the day the Chief of the Bulgarian Army Staff General Nikola Kolev cited preliminary information, according to which the crashed helicopter is owned by a Bulgarian commercial company, which has been contracted to work in Iraq.

He underlined the accident has nothing to do with Bulgaria's unit in Iraq.

CNN claims that the helicopter is owned SkyLink, a US-based charter company. A SkyLink official in Baghdad said the company is aware of the incident and is investigating the crash.

SkyLink's Web site said it has four helicopters in Iraq, two of which are MI-8s.

Read LATEST UPDATE on the incident