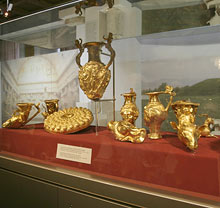 Spanish public will be able to enjoy the unique gold Panagyurishte treasure (pictured) and other gold atrifacts from 48 Bulgarian museums for an year starting April 14. Photo by Yuliana Nikolova (Sofia News Agency)
By Asya Koleva

A Hungarian friend once told me: "I cannot find anything interesting in archaelogy". I was amazed to hear this from an open-minded person, interested in almost anything to do with art. And then I thought: "Small wonder - she has never lived in Bulgaria!"

The only proofs of the lost time lie peacefully now under window glasses and muted lights in the museums all across the country. Bulgaria can boast with museum collections presenting some of the most ancient gold artifacts ever found in the world.

Some of them include the 6,000 year-old 3,000 gold artefacts from the Varna necropolis, believed to have belonged to the oldest civilization in this part of the world, the unique treasures found just an year ago by Bulgarian archaeologists, including the 5,200 year-old 450 gold artifacts and jewellery, and the 2,500 year-old gold mask of the Thracian king Seutus III.

The list is long. But the pearl of Bulgaria's gold treasures remains the unique Panagyurishte treasure.

Made of 6.164 kg solid gold, it consists of nine utensils with rich decoration unearthed accidentally by three common workers in 1949. The biggest utensil is an Amphora rhyton. Seven utensils are rhyta (horn-shaped), three are in the shape of animal heads, one is like front part of he-goat's body, three are like women's heads, and one is phiale. It is dated to the last 3-4 decades of the 4th century B.C.

The theories surrounding the purpose and the making process of the gold art pieces are countless. Some believe they were made as a gift to the Thracian king Theres. Others say that the gold set was designed for ritual purifying of a liquid, probably wine, by decanting from one utensil into another. But one is sure - the treasure is an amazing piece of art - a bridge, connecting the soul and hands of the ancient craftsman to the eyes and hearts of the modern man.

Just in ten days, on April 14, the unique Panagyurishte treasure together with other gold artifacts from 48 Bulgarian museums will start its tour around Spain. It will be exhibited consecutively for a year in the cities of Barcelona, Madrid and Valencia under the name "The Enigmatic Thracian Treasures of Bulgaria".

This is not only another chance for people of different culture to view the brilliant masterpieces of the ancient Thracians. This is also a chance for these people to rediscover Bulgaria, its rich history, archaeology and art traditions and its cultural variety. A chance for those people to understand why is it so special to live in a place, inhabited for thousands of years, where every hill might hide another ancient tomb.

A chance to feel the spirit of Bulgaria - the land of plenty.