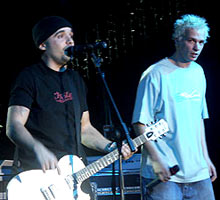 Popular showman Deo (R) and Dicho (L) from D2 band produced the new MTV hit - Tova sme nie (It is us) - to be on air of World Chart Express Saturday morning and Sunday evening. Photo by avtora.com
MTV Europe has once again succumbed to the magic of Bulgarian music, as a Bulgarian-text hit of D2 & Deo will be played on World Chart Express.

First appearance on MTV air is expected on Saturday, at around 10:00 am, and again on Sunday, about 8:00 pm, Bulgarian time.

"Tova sme nie" (It is us), which is part of the soundtrack of Bulgarian film "The Riot of El", has stormed directly at fourth place of MTV's popular chart.

Part of the cast are Deo, a popular showman, singer and lifestyle profile, features the "bad guy" in the movie of Kiran Kolarov, and Dicho, vocalist of hit-strong D2 band.