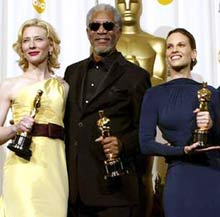 It marked the third time that Scorsese has lost the directing Oscar to an actor-turned-filmmaker. The others were to Robert Redford in 1981 and Kevin Costner in 1991.

Jamie Foxx took best actor for his performance at Ray Charles in ''Ray." In his speech, the actor, who was also nominated for a supporting role in ''Collateral," led the audience in a shout-out to the late Charles, who may now have won as many awards in death as he has in life.

Five years after ''Boys Don't Cry," Hilary Swank consolidated her reign at the top of the American film industry by winning a second best actress Oscar, for her portrayal of boxer Maggie Fitzgerald in ''Million Dollar Baby," which won four awards overall.