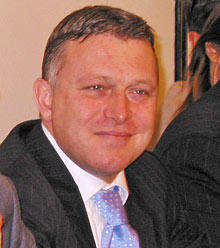 Miroslav Sevlievski, the leader of only ten Bulgarian MPs, managed to drive the Prime Minister to the wall and get a ministerial post. Photo by Kameliya Atanasova (Sofia News Agency)

The government of former King Simeon Saxe-Coburg is apparently to be remembered with its two major reshuffles in about a year and a half (a total of three since stepping in office). Both moves - in July 2003 and February 2005 - were preceded by big hullabaloos, and fuelled great expectations for new directions in the state apparatus.

But as time passed it became clear that the 2003 reshuffle would not bring about any groundbreaking changes. The move from February 21 doesn't seem to have much chance either.

The reasons for both were manipulative instead of fair and pragmatic. In 2003, dislocating the same old political figures from one post to another was merely a show-off to quell people's dissatisfaction with the government. Lidia Shuleva and Nikolay Vassilev simply shifted from one ministry to another, while the new ministers of social affairs, healthcare and education were no other than the former deputies.

It is hard not to think that this Monday's political whirligig was most of all to please the New Time, a fresh partner in the ruling coalition. That handful of people had all eyes on them earlier in February, when they supported a planned non-confidence vote against Saxe-Coburg's Cabinet. Just a few days later, the New Timers horse-traded their support and joined the Premier's side, securing the survival of the government in the vote.

No surprise as New Time's floor leader Miroslav Sevlievski received a fresh ministerial appointment on Monday. He took on the post of Energy Minister Milko Kovatchev, who in his turn will replace Lidia Shuleva as Economy Minister.

That ministerial domino triggered by the need to please the New Timers is anything but an honest and efficient political act.

This summer's vote will be the most objective test on whether a Cabinet including Sevlievski is better liked than the one without him.