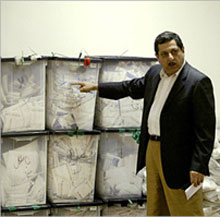 Turnout in Iraq’s election was about 58%, with a total of 8,456,266 people voting, election commission officials said. Photo by by www.english.aljazeera.net
A Shia-dominated coalition won nearly half of the 8.5 million votes cast in Iraq's election, followed by the alliance of Kurdish parties, which garnered about 26%.

The party of interim Prime Minister Iyad Allawi ranked third with about 14%.

Some 58% of the eligible voters cast their ballot, but much of the Sunni minority did not take part, the Iraqi election commission said.

The United Iraqi Alliance will be granted the most seats in the new 275-member assembly, and is expected to name the new prime minister.

The results will become official if no complaints, to be lodged within three days, are upheld.
Politics » Be a reporter: Write and send your article
Advertisement
Advertisement
Expats.bg All Are Welcome! Join Now!
More from Politics