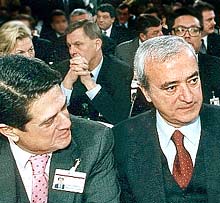 The main work takes place Saturday and Sunday, with this year's meetings to be attended by, among others, German Chancellor Gerhard Schroeder and UN Secretary General Kofi Annan.

The conference, which was initially founded as "Wehrkundetagung" by the German publisher Ewald von Kleist, focuses this year on foreign and security policy challenges in European and American relations.

"The existing dialogue between the EU and the US neither addresses the increasing importance of the Union nor does meet the needs of the transatlantic relations," Schroeder said.

The Chancellor remarked that the partnership should be arranged according to the changing conditions and new difficulties.