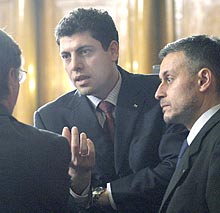 Minister Velchev turned hard on the opposition during the Parliamentary debates of the non-confidence vote on Thursday, with a memorable speech, interspersed with quotations and proverbs.

"Should it be up to you to form a government, you will end up in a fight in the worst possible scenario", Velchev told the opposition, which blame the government of stalled privatization, failed health system reform, raging corruption and crime.

"In the best possible scenario the fate of the trolls in "Lord of the Rings" could easily befall you - while they wondered how to cook the captured Bilbo they had been turned into stone by the first ray of sun", Minister Velchev added.

Lora, who called the news room of local 24 Hours Daily, claims that the episode is not from the "Lord of the Rings", but "The Hobbit, or, There and Back Again", also authored by the JRR Tolkien.
Politics » Be a reporter: Write and send your article
Advertisement
Advertisement
Expats.bg All Are Welcome! Join Now!
More from Politics