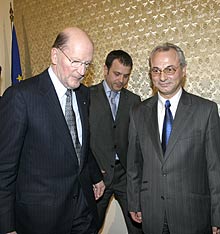 A total of 128 MPs voted Friday against the draft decision moved exactly a week ago for the removal of the cabinet. The ballot of opposition factions accounted to 106 votes and only two MPs abstained.

A total of 236 out of 240 MPs took part in the crucial vote that had threatened to poise the country on the verge of political crisis and probably to preliminary elections.

The government survived with the votes of coalition partner Movement for Rights and Freedoms and eleven of 13-member defector faction New Time.

After actually triggering off the parliamentary and cabinet crisis last week signing up the opposition's claims for resignation of parliamentary speaker and the whole cabinet, the New Timers deserted from the opposition signing Monday a coalition agreement with ruling Simeon II National Movement and Movement for Rights and Freedoms.

There have been reported claims from the party of Emil Koshlukov that they would support the government at the cost of cabinet reshuffle, insisting they must be equal partners within the newly formed ruling coalition.

This is the sixth non-confidence vote against the government headed by Simeon Saxe-Coburg since 2001 when he won a landslide victory in then general elections.
READ MORE in For the Record, A Day in the Life sections