US Top Official Wants Release of Bulgarians in Libya 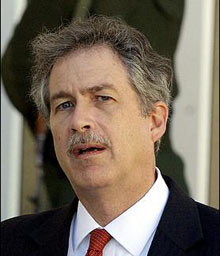 US Middle East pointman William Burns held talks in Tripoli with Libyan leader Muammar Qaddafi and Foreign Minister Abdelrahman Shalgham. He had reportedly urged Libya to free Bulgarian medics sentenced to death over deliberate HIV spread. Photo by WN
The US Assistant Secretary of State for the Middle East William Burns has urged Libya to free the five Bulgarian nurses on the lingered HIV trial, media informed on Friday.

William Burns, who is currently on an official visit to Libya, held a meeting with Colonel Muammar Qaddafi on Thursday. He is the latest in a long list of top Western officials and leaders to visit the North African country as the once pariah state emerges from international isolation.

Earlier this week, it became known that the Supreme Court in Tripoli would hear the case against the Bulgarian medics on March 29. A court in Benghazi sentenced the nurses and a Palestinian doctor to death for deliberate HIV infection of hundreds of Libyan children last year.

Meanwhile Bulgarian government decided to allot additional BGN 200,000 from the 2005 budget for the defence of the Bulgarians. The defense expenses will be mainly linked to the appeal process of the death sentences.

There is an appointed court hearing on Sunday of two civil indemnity claims of nearly EUR 6 M initiated against the Bulgarian nurses.
Politics » Be a reporter: Write and send your article
Advertisement
Advertisement
Expats.bg All Are Welcome! Join Now!
More from Politics