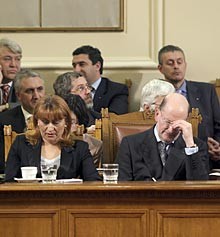 The Cabinet of Bulgaria’s former King Simeon Saxe-Coburg (front, R) will stand up to a non-confidence vote on Friday evening. The opposition attack was triggered by a failed privatisation move of Economy Minister Shuleva (front, L). Photo by SNA
The vote on a non-confidence move against the Bulgarian Government is scheduled to take place at 7 p.m. local time on Friday.

Opposition parties, however, apparently have a faint chance of succeeding, as earlier the Novoto Vreme ("New Time") faction withdrew from the non-confidence motion and joined the two parties in the ruling coalition.

Media have been keen on disclosing what would be the political reward for Novoto Vreme's sudden U-turn.

There have been speculations about the ambition of Novoto Vreme Parliamentary leader Miroslav Sevlievski to take on a ministerial post. Sevlievski did not confirm that information, but said that Cabinet changes were part of their coalition agreement indeed.

The move against the Government was triggered by the failed privatisation of Bulgartabac, the country's tobacco monopoly. Political squabbles had chased away British American Tobacco, formerly bidding for three of Bulgartabac's most profitable factories.
MORE About the Non-confidence Votes against ruling Cabinet in the Fore the Record Section