Car Bomb Injures over 40 in Madrid 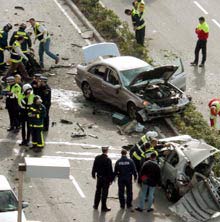 A powerful car bomb exploded in Madrid Wednesday, injuring more than 42 people, following a telephone warning from a caller claiming to represent the armed Basque separatist group ETA. Photo by WN
A car bomb ripped off in a Madrid business park and injured at least 42 people, hours before Spanish King Juan Carlos was due to visit the area.

Responsibility for the bombing claimed the Basque separatists ETA.

The blast, which dealt a fresh blow to efforts to defuse ETA's four-decade campaign for Basque independence, came as 14 people suspected of belonging to the banned organisation were arrested in a major anti-terrorist sweep.

The car, stolen a few hours earlier, was parked outside the Spanish headquarters of the French computing company Bull, and the blast shattered the building's windows over five storeys, an interior ministry spokesman said.

ETA has been blamed for the deaths of more than 800 people in its long fight for an independent Basque homeland straddling the Pyrenees between France and Spain.
Politics » Be a reporter: Write and send your article
Advertisement
Advertisement
Expats.bg All Are Welcome! Join Now!
More from Politics