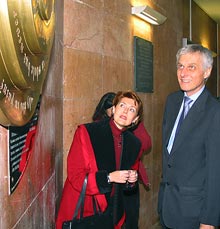 UK Ambassador in Sofia Jeremy Hill attended the ceemony in Sofia subway, which marked the joining of the UK Embassy and British Council to the initiative "Poetry on the Walls". Photo by Kameliya Atanasova (Sofia News Agency)
UK Embassy in Sofia and the British Council joined the initiative of the Royal Netherlands Embassy to decorate the capital with poems in different languages.

The first poem in "Poetry on the Walls" project - by Dutch Jan Hanlo - marked the assuming of the EU presidency by the Netherlands, its words painted on a wall of the Natural Science Museum.

Now the words of a poem by Scottish poet Liz Lochhead found their way to the Sofia subway, an idea, borrowed by the seventeen-year old tradition of London "Poems on the Underground". The project, now assumed to be part of the urban landscape, is considered one of the most successful public art projects.

The work of art was unveiled on Thursday by Ian Stewart, Director of British Council Bulgaria, at a ceremony attended by UK Ambassador in Sofia Jeremy Hill and Dutch Ambassador to Bulgaria Baroness Henriette van Lynden.

The initiative "Poetry on the Walls" aims at promoting the diversity of European languages and literature.