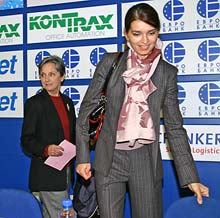 More than BGN 25,000 were garnered during the charity dinner with auction and lottery over last weekend, attended by the elite of Bulgarian diplomatic corpse, business, political, and social life.

This year's campaign for fight against breast cancer is held under the aegis of Bulgaria's First Lady Zorka Parvanova.