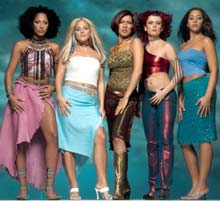 Bulgarian singer Lucy Dyankovska, 2nd right, who was a part of the successful girl band No Angels, stormed the German Bravo chart and was ranked 2nd with her single “Where.” Photo by www.wien.gv.at
Bulgarian pop singer Lucy Dyakovska was ranked second in Germany's Bravo rank list with her new single "Where."

Lucy, who was a part of the successful German girl band "No Angels", was also among Germany's sexiest women according to the "FHM" magazine. The Bulgarian excelled named like Pamela Anderson, Julia Roberts and Leticia Casta.

No Angels were formed in 2000 on the international television sensation POPSTARS. They sang in English and were popular throughout Europe. The group skyrocketed to fame with their debut single "Daylight In Your Eyes". It remained N1 in Germany for a month. They then released their debut album, Elle'Ments. It sprouted the follow up single "Rivers of Joy". The girls then re-released Elle'Ments with new tracks including the third single "There Must Be An Angel"(a remake of the 80s classic).