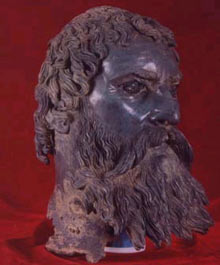 The Thracian bronze head unearthed by TEMP 2004 expedition of Georgi Kitov in the Golyamata Kosmatka mound saw its first public exhibition on the 135th anniversary of Bulgarian Academy of Sciences. Photo by temp-bg.com
Despite lingering on the very lowest line of funding in Europe, Bulgarian scientists manage to be professionally shoulder-to-shoulder with their European colleagues.

This and other sad but also cautionary facts were highlighted on the day when Bulgarian Academy of Sciences celebrated its 135 years of existence and fruitful work.

The problem in financing scientific researches in Bulgaria does not lie in the effectiveness of funds exploitation, which is high, but in their extremely small amount, Academician Ivan Yuhnovski, President of the Bulgarian Academy of Sciences, said in his solemn speech on Tuesday.

Bulgarian science gets nearly 33 times less funding than the average in Europe, but the academic society in the Balkan EU-hopeful country shares the conviction that it would slowly but surely be overcome.

The Academy's hall marked the anniversary with a rich exhibition of historic artefacts, including the unique bronze head of a supposedly Thracian ruler found during latest excavations in Kazanlak's Valley of the Kings.