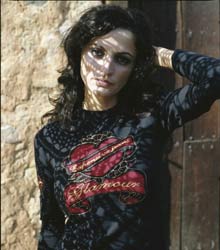 The single will have a limited edition and the fans will be able to find it in the major music stores across Bulgaria. Besides the new hit, the disc will include and the instrumental and the video of the single.

The video was shot in a typical Bulgarian village as the director and Nina Nikolina wanted to capture the unique atmosphere of the traditional Bulgarian lifestyle. They choose the Osoitsa village, some 40 km away from the capital city Sofia, which has already been filmed in several Bulgarian movies.

Besides her new hit Nina Nikolina has also organized a new surprise for her fans: a special performance of traditional Bulgarian folklore will take place October 13 in Sofia.
Society » Be a reporter: Write and send your article
Advertisement
Advertisement
Expats.bg All Are Welcome! Join Now!
More from Society