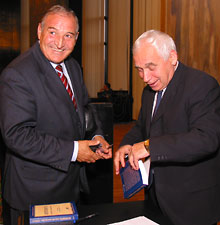 Ex-President Dr Zhelyu Zhelev (R) recorded for history all his interviews given to local and foreign media in the period between 1989 and 2000. He presented the printed edition on Monday. Photo by Kameliya Atanasova (Sofia News Agency)
Bulgaria's former President Dr Zhelyu Zhelev has collected and published his interviews in a printed edition issued by the same-name foundation.

Dr Zhelev has made a historic record of all his interviews given to local and foreign media between 1989 and 2000.

The published documents reflect on major turnovers of Bulgarian history through the eyes of its then-president.

A historic moment in Dr Zhelev's presidential mandate was Bulgaria's recognition of independent Macedonia on January 15, 1992, ten days ahead of Turkey and half a year before the European Union.