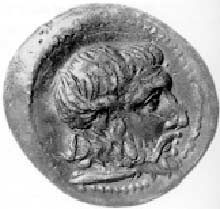 Thracian ruler Seuthus III did rule a mighty state about V century B.C. on nowadays Bulgarian land an evidence of which are the numerous coins found with his engraved image and the many sets of gold and silver treasures.Photo by Internet
Inscriptions read out on two silver vessels from the Thracian treasure revealed in the Golyamata Kosmatka mound has confirmed the supposed dating of the tomb to the times of ruling of King Seutus III.

The archeological team headed by Dr Georgi Kitov has opened a new page in history of ancient Thracians by actually finding the mausoleum of one of mightiest Thracian rulers.

Archeologists said that the gold-treasure-hiding mound was built for about six months and subsequently completed with the temple engraved inside.

The artifacts of exquisite and invaluable cost were made by the fabulous Thracians, who lived in what are now parts of Bulgaria, Romania, Macedonia, Turkey and Greece, and are thought to date to the 5th century B.C.

The Thracians left no written account of their history and traditions so archaeological finds are the only window to their world.

The mostly well-known until recently Thracian tomb near the town of Kazanlak is part of the UNESCO list of world historical heritage.

READ MORE about Thracians in For the Record section