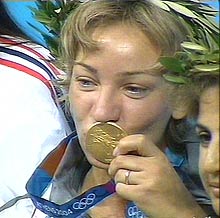 Her 103.2 finals score is an Olympic record.

She defended her title with 688.2 score in total.

This is Grozdeva's second medal at the Athens Olympics after winning a bronze medal in the women's 10m air pistol on Monday.

Maria Grozdeva carried the colors of the Bulgarian delegation at the official opening of the Olympic Games in Athens August 13. This was the first time that a woman bore Bulgaria's national flag at the Olympic Games.

MORE about Maria Grozdeva - READ TODAY in For The Record section