Hunt for Transvestites Urged in Athens 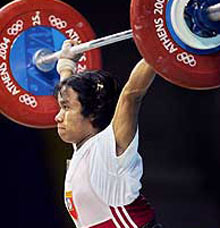 Coaches of European teams, including Bulgaria, unofficially protested against the "poorly disguised men in the female competition".

According to them Asian ladies evade dope and sex checks prior to the competition.

Nan Aye Khine from Myanmar has reportedly come under harsh attacks in the 48-kilogram weightlifting for women. The 27-year-old finished fourth in the women's 48kg catergory last Saturday but was thrown out of the games after a positive anabolic steroid dope probe.