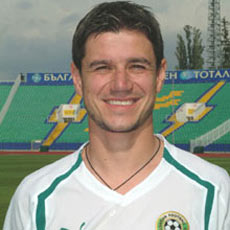 A regular for Bulgaria since making his debut against Uzbekistan, a 0-0 draw, in July 1995, Petkov played in qualifying for UEFA EURO 2000 and the 2002 FIFA World Cup although his country failed to qualify for either.

Born in Dobrich in 1974, Petkov's football career began at his hometown club, PFC Dobrudzha Dobrich, for whom he first appeared in the 1991/92 season. Two seasons later he was a regular, and after 62 league outings, scoring eight goals, he switched to one of Bulgaria's leading clubs, PFC CSKA Sofia.

In 1995 he scored twice in 28 games in his first full season at the capital club, but doubled his tally of strikes the following term as CSKA won the domestic double. Another Bulgarian Cup success followed in 1999, but midway through the next campaign he left his homeland for AEK Athens FC.

Struggled to settle initially, yet helped his new employers win the Greek Cup in 2000 and 2002. A quick yet unpredictable performer, Petkov failed to hit the target in any of his 14 first-team appearances for AEK in the 2001/02 campaign.

Another barren season in front of goal, Petkov failed to register in 19 Alpha Ethniki games as AEK finished third. Played three times in the UEFA Champions League and scored once, against Maccabi Haifa FC, in the ensuing UEFA Cup campaign.