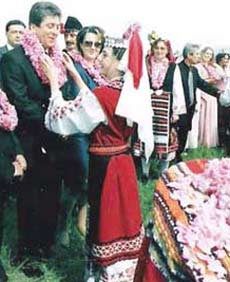 Kazanlak's Rose Valley marked the start of rose-picking, attended by thousands of guests, including President Georgi Parvanov. Photo by bTV.
The rose could be the symbol of Bulgaria's euro coin, according to EU Commission President Romano Prodi.

The news was announced by President Georgi Parvanov, who attended the pinnacle of Rose Valley celebrations in the town of Kazanlak.

The 18-aged Boyana Tchakalova swept the crown of Rose Queen 2004 competing with another 22 rivals at the traditional contest in the small town of Kazanlak.

A vast audience of over 3,000 spectators attended this year's rose beauty rivalry.

People from Bulgaria, Japan, France, Spain and the Balkan countries flocked to Kazanlak over the weekend to celebrate the start of rose picking.

The teen rose crownee will represent Bulgaria at the Rose Festival, to be held in Japan.