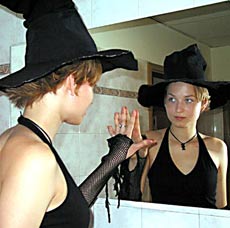 Bulgarian Harry Potter fan is dressed to match her favorite heroine from the films, and take part in a Potter costume contest. Photo by Kameliya Atanasova (novinite.com)
Hundreds of Harry Potter fans gathered in Sofia on their first-ever national meeting. The event was co-organized by the local fan club.

At the party in Amor nightclub, guests were introduced to the new computer game Harry Potter and The Prisoner of Azkaban. A multimedia presentation of the game was screened for the first time in Bulgaria, and the software should be available around June 20.

Organizers of the meeting handed out presents to all of the fans, and challenged their creativity with a Potter costume contest.

While preparations for the party were on this week, organizers told Novinite.com that the youngest participants were at the age of seven, but there were people in their 30s as well.