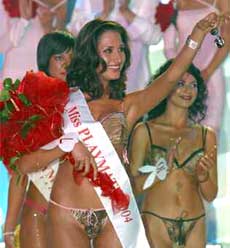 This was the country's first ever playmate competition, launched two years after Playboy Bulgaria issue No.1 came out.

Twelve beauties competed for the award, and for the Mazda MX5 Cabriolet offered by organizers to the winner. The young women were featured on the cover of the latest Playboy Bulgaria, as well as in a special portfolio. Bulgarians were urged to vote for their favorites via mobile phones.

But Madlen's popularity as a model apparently helped her overpower the others. Her fame flared up after appearing in a vodka ad on television. The video shows Madlen getting ready for a flirtatious night by rehearsing a sizzling strip.