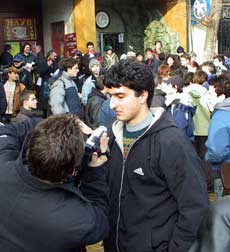 Bulgarian producer Bozhinov told Novinite.com he was not surprised Potter makers turned down Bulgarians for the part of Viktor Krum. They chose a Scottish boy instead. Photo by Novinite.com archive
The Bulgarian producer who directed the local casting for the Viktor Krum part said he was not surprised that they chose a Scot after all.

Producers of the Harry Potter and The Goblet of Fire movie had assigned Valeri Bozhinov to give an audition to Bulgarian Krum wannabes. During the two-day casting in Sofia, Bozhinov spotted about 50 boys and introduced them to decision-makers in London.

"The last thing they informed me about was that a London-resided Bulgarian was chosen for the part," Bozhinov told Novinite.com.

According to fresh media reports, producers have now eyed a Scottish boy.

"It's normal for different castings to be held when searching for an actor in such blockbusters," Bozhinov explained. He said that it was not necessary to pick a Bulgarian actor just because Krum was Bulgarian, according to the book.

But the news about the Scottish elect obviously disturbed Bulgarian Potter fans, who were hoping one of them could become a real movie star.

Earlier, Hermione-playing actress Ema Watson hinted that the boy to play Viktor Krum's role was "very sweet". In the fourth book, Hermione falls in love with the head of Potter's quidditch team.