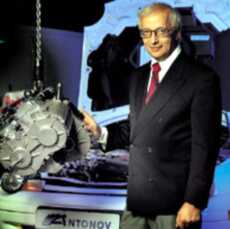 Roumen Antonov left Bulgaria in 1988 and settled in France, where he started work on a new type of automatic gearbox that would require less of the power-sapping hydraulics conventional auto boxes need to operate.

The Antonov box makes use of a mechanical force that has generally been regarded as a drawback that needed to be overcome. The force is produced as the angled teeth of helical gears mesh, and it has the effect of making the gears move apart along their respective central axes.

In an automatic box, however, the gearsets move in order to shift gears, and Antonov found that he could use the forces created by the helical gears to assist the hydraulics that move the gearsets in conventional designs. This, together with the fact that the Antonov box does not require a torque converter, which absorbs a great deal of power, makes the new design suitable for the small engines that make up the major proportion of the European market.

At only 25 cm in depth, the Antonov box is appreciably smaller and lighter than other automatics. Because of the lack of hydraulics and torque converter, the designer also claims that it is also more efficient, providing faster acceleration, higher top speeds and offering fuel savings of up to 20 percent.

Antonov's gearbox investigated by a number of the world's top gearbox manufacturers as well as vehicle manufacturers Honda, BMW, Ford, and Peugeot.

Antonov's company has no plans to manufacture the transmission, but in collaborating with major gearbox manufacturers like Getrag and Fiat-GM Powertrain in Europe and Aisin and Jatco in Japan, it is hoping to sell its technology and to work with the specialist manufacturers to develop the principles involved.