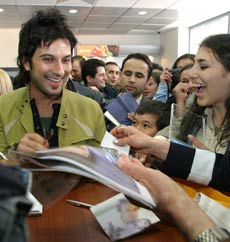 Tarkan became world renowned following his "Simarik" (Spoiled) song. French media even called him "The Prince of the Bosphorus".

The song with the kiss achieved the highest rankings in the international charts, although it's not entirely new. In Turkey, already two years ago, "Simarik" was played country-wide through the loud speakers.

In his pieces that are often based on traditional Turkish melodies, Tarkan combines oriental sounds with catchy western pop rhythms.
Society » Be a reporter: Write and send your article
Advertisement
Advertisement
Expats.bg All Are Welcome! Join Now!
More from Society