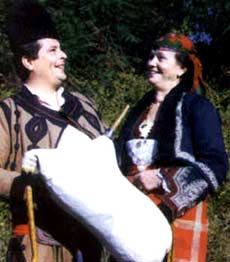 The most famous voice of Bulgaria, symbol of the "Rhodope song" is also called the phenomenon in the Bulgarian folklore. The glamorous career of the talented Balkanska, born in the Rhodopes mountains, began with the song "Izlel e Delyu Haidutin." This particular song together with twenty-seven other musical performances was sent to space in August 1977 with US Voyager.

The story behind the outer space travel of "Izlel e Delyu Haidutin." is an interesting one, Balkanska recalls in her biography book. I was watching TV and all of a sudden I heard my song, she explained.

Beethoven, Bach, Mozart and Luis Armstrong are among the music accompanying the Bulgarian song in its 6,000-year-long journey.

First among Bulgarians, Balkanska has been honoured by UNESCO as "citizen of the planet" for her contribution to the popularization of Bulgarian culture. She also features in the "Time Magazine" gallery of persons symbolizing the future of Europe.

A legend in her own country, Valya Balkanska is very much a legend in space, too, the US magazine says.