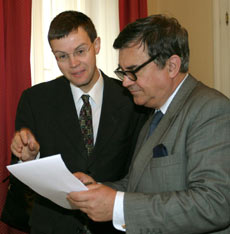 H.E. Karl Diem (right), Austrian Ambassador to Sofia, and Lothar Jaschke, Minister-Counsellor with the Embassy, announced the start of the Austrian music days, to take place May 3-9 in Sofia and Plovdiv. Photo by Yuliana Nikolova (novinite.com)
Austrian music days will take place in Sofia and Plovdiv from May 3 to 9 to mark the 125th anniversary since establishing diplomatic relations between Bulgaria and Austria.

The event is organized by the Austrian Embassy in Sofia and the Ancient Plovdiv association with the cooperation of Austria's Foreign Ministry and the Austrian Composers association. The event will take place under the patronage of Karl Diem, Austrian Ambassador to Bulgaria.

The festival will open with a concert in Bulgaria Hall on May 3. The philharmonic orchestra will play with Austrian soloist Karen de Pastel, Mr. and Ms Renner and Srebra Geleva Mozart, Doppler and contemporary music from young Austrian composers like de Pastel, Steinkogler, Wagner and Schneider.

The two Chamber Concerts in Balabanov House in Plovdiv on May 4, 5 will also feature music from Austrian contemporary composers. The festival will close with a concert by the soloists in the Sveti Ludwig Cathedral in Plovdiv, exactly on Europe Day.

That might be a coincidence but we are glad that such a major cultural event will mark the anniversary since the establishment of diplomatic relations between Bulgaria and Austria, Karl Diem, Austrian Ambassador in Bulgaria said.

The idea of the overall theme of the Austrian Music Days is to bring music written by composers from different countries together and to strengthen the international character of music, Lothar Jaschke, Minister-Counsellor with the Austrian Embassy said in an exclusive interview for novinite.com.

FULL Text of the interview READ TODAY in the Exclusive for novinite.com Section