The Passion of Bulgaria 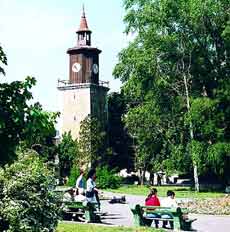 The clock tower is one of Svishtov's symbols. It stands right on the opposite on the local Economy Academy, the oldest economy university in Bulgaria.
One died ...
Two died ...
Six died ...
Nine died ...
Ten died ... and two still missing ...

Not in Iraq and not soldiers, but kids, Bulgarian teenagers traveling merrily on their way back home for Easter.

Loaded with fresh impressions and emotions from their five-day trip to Croatia's Adriatic pearl of Dubrovnik, they were due to be home ... today.

Home, in the town of Svishtov, perched on the higher right bank of the Danube River offering an eye-bird view to Romania's twin town of Zimnitch.

Those Bulgarian teens were blessed to live in one of the most beautiful and probably the youngest Bulgaria's town. With its nearly 50,000 of population, Svishtov is full of youth faces and endless student parties all over the year.

It would take me at least a double page to enumerate the outstanding facts, figures and names associated with the Danube-located Bulgarian town.

Favored since Roman times for its strategic position the place still keeps the remains of the Roman fortress of Nove. Its ever young population is proud with the fact of living in the first Bulgarian town to be liberated from the Ottoman yoke in 1877.

Yes, liberated and highly educated thanks to the oldest university institution in Bulgaria, the Economy Academy. Its century-long history attracts about 10,000 students in economics.

Probably the old saying "too much of a good thing" can refer to the town of Svishtov. With life being so merry and full of emotions, the town has also known the harshest pain and suffering of living it through.

And most of all Svishtov's children have suffered.

On the solemn 100th anniversary of its liberation, on March 4, 1977 Svishtov gave its awful sacrifice.

In the mighty earthquake then, with epicenter in Romania's Vrancha, scores of children were buried under the ruins of a newly built block. And most of them were gathered to celebrate a birthday party.

Now, seventeen years later, in the beginning of Easter's Passion, the youngest and merriest Bulgarian town has sacrificed again its children.

Twelve killed ... in a road accident in Serbia and Montenegro ... accidentally ...

Was it really an accident?

Accidentally or not, the bus had changed its original route in order to shorten the distance and save time to reach home as soon as possible. The accident happened on a rain-wet road, high in the Montenegrin mountains of Gostun. They can truly be called now the Black Mountains.

It is inevitable to draw a parallel with the tragedy, which occurred on the Eve of Christmas 2001, when seven Bulgarian teens got stuck to death while crowding to enter a disco in Sofia.