The Man Behind The Desk 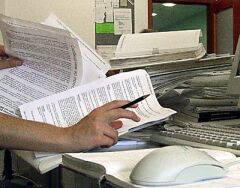 Few people think about it, but if they did, they would remain rather amazed by the complicated relations between Bulgarian people and state officials. Indestructible relations indeed, since state employees have always been the curators of the modern life's formal side. Yet, in the minds of the rest of Bulgaria's people state administrators remain quite mysterious, mighty and fearful figures.

In a state that has just begun to scatter the fog of bureaucracy from its institutions, the stereotype of the man behind the desk who has the power to lighten or embitter your entire life, is still vivid.

And if a country's public life is to be seen as a fairy tale, and in every fairy tale there are some "bad", dreaded but powerful characters, in Bulgaria its "white collars" would fit this role perfectly.

If we follow this line, we face the question what are the secret weapons that bear their odd might?

First of all, it's the desk -- an item traditionally associated with a secure job. Sitting behind a desk means that you have struggled your way to a safe niche in the state apparatus. The desk is a shelter from the storm of risk-mined free market and guarantees for a fixed sum that you put in your pocket at the end of each month. Yes, free entrepreneurship could be profitable, but hazardous, especially in a still developing country. And many of this country's residents keep yearning for a desk of their own somewhere in the "safe and warm" state offices.

This leaves people on the two sides of the desk in completely different positions. It feels like the power of the law and the whole state system is in your hands when you slump into the chair and rest your elbows against the bureau, covered with paper sheets, forms, stamps and folders...

Speaking of forms and stamps and all the stationery, they also possess a strange power over people's imagination. They are seen as attributes of a highly educated and skillful person, and thus could not be managed by everyone.

The key to understand this mysterious feeling for paperwork originates from Bulgarian people's ancient, strong desire for knowledge. Nowadays those who speak many languages, operate with huge numbers and specific terms, etc. are still treated with great respect, no matter if their work is routine and not so well paid. A man behind his desk knows what each form is about, he holds the stamps, makes the phone calls, and issues papers that affect your everyday life in countless ways. And everybody has at least once been in the position to entirely depend on such а paper or stamp.

Bulgaria's state office workers are said to often give in to the temptation of misusing that power. And most of the people apparently believe that they have to pay in order to get an administrative service. And, willing to save time and trouble, many decide to pay eventually, and get sucked into the long-standing vicious circle of corruption.

The end of the tale, which is still to come, will hopefully be a happy one. Over the last few months there is a tendency for state leaders to bring stronger pressure on functionaries to provide higher-quality services in more strictly fixed terms. The crusade against corruption was also declared one of the country's main priorities.

But the man behind the desk is still seen as a figure with almost unlimited power, and papers remain a monstrous obstacle in the path of routine actions.

The "good" ones in this story? They are probably those of Bulgaria's officials who already took the road of pragmatism and efficiency rather than stereotypes.