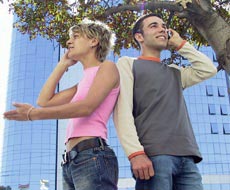 Do mobiles alienate us? Do they bring added value to the intimacy in human relations? Whatever the answers personal security and keeping in touch are attractions that keep mobiles very popular among young people. Photo by Yuliana Nikolova (novinite.com)
By Milena Hristova

Everybody knows my loved one. We are together from 7 a.m. each day and this is the last thing I see each night. We are in touch 24-7. When I am introduced to somebody, they are quick to ask questions about my ... mobile phone.

Every proud owner of a mobile phone is guilty of treating his phone like a lover. The intricate net of relations one inevitably gets into resembles a love-and-hate affair. Certainly at times it feels like you have moved into a new place and share it for the first time with your girl/boyfriend. The little phone gives us a sense of security but at the same time invade our personal space to relax, together with the loss of romanticism and disillusionment that quite often ensues.

Gone are the times when owning a mobile phone in Bulgaria was a sign of financial well-being, high living standards and social position. Now it is a pure necessity and an elegant accessory.

Every third Bulgarian had a mobile phone in 2002, which marked a radical change over the previous year, when nearly 119 out of every 1,000 Bulgarians were mobile operator subscribers. Following the boom around the Christmas and New Year holidays, when the number of subscribers to the two GSM operators in Bulgaria, Globul and MTel, grew by 350,000, sales of mobile phones have been picking up.

The ratio of stationary to mobile phones in Bulgarian households is still three to one though its is a common practice that two, three or even more members of a family owns a mobile phone, a survey, conducted five months later by Vitosha research poll agency, shows. High prices drive nearly 90% of the people without a mobile phone not to plan to buy one in the next six months. Those who plan such a move however show no preferences which mobile operator they would choose. In other words, though marked by dynamic development, the mobile services market in Bulgaria has a tremendous potential.

Still the figures beg questions. Don't mobiles start to play too large a part in our lives? Are they safe?

Mobile phones are low power devices that emit and receive radio waves. The fact by itself sets no precedent - it is the speed with which mobile phones have become so widely used that is unprecedented and raised concerns over their impact on people's health.

Clinical studies talk of how mobile phones make people tense and stress them out - cancer risk, radiation, breaking out in a rash. Experts advise children and young people particularly to take precautions. But the advice it seems, isn't being heeded by shoppers - as MTel celebrated its subscriber number 2, 000, 000, operators offer generous promotional packages, signing up new subscribers.

There are a number of reasons and settings for owning a mobile phone - at work, at home, out and about, for convenience and security. (I personally am always ready to reach for my mobile phone if I am coming home late at night and the taxi driver looks at me suspiciously).

For business people phones glued to their ears is very much a fact of life, very much like hotel living in our age of globalisation. Personal security and keeping in touch with others are certainly attractions that keep mobile phones extremely popular among young people, who also become the most common victims of mobile phone thefts.

If you go to one of the places where damaged mobile phones are repaired, you will find out the people there have a lot of interesting stories to tell - about the known-for-his-fiery-temper husband, who broke his after throwing it twice at his wife, or about the woman who stuck her arm in the toilet while trying to pick her mobile phone out.

But mobile phones are not just for talking any more with millions using them to send text messages, play games and get the latest news. They send and transmit pictures, add sounds or double as a portable compute and one can bet companies are gearing up for an array of new products!

The various gimmicks come as a substitute for many real things but doubtless keep us together though at a distance.

Can anything beat the intimacy of communication by texting? Doubt anyone would disagree, even those who are always complaining of pestering colleagues, virtual friends and the embarrassment of being called at their mobiles while... making love.