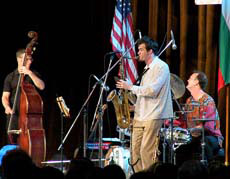 The jazz concerts are dedicated to the 100th anniversary since the establishment of diplomatic relations between Bulgaria and the United States and Independence Day, which is also the national holiday of the United States.

The concert in Bulgaria is part of their six-week tour in Eastern Europe under a project, organized jointly by the US State Department and Washington's Kennedy Centre. The project, called Jazz Ambassadors, has been going on for six years already and aims to bring to music communities around the world the best of US jazz.
Society » Be a reporter: Write and send your article
Advertisement
Advertisement
Expats.bg All Are Welcome! Join Now!
More from Society