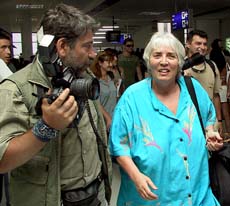 Hollander's most successful book "Happy Hooker", both fiction and non-fiction, which have been translated into 15 different languages. Her books are still intriguing new readers with their humour, zest for life and above all for the downright honesty that remains a landmark in the struggle for sexual freedom and for freedom of expression.

Hollander became the most influential "madam" in New York in the 60s.

She started her career as a companion in a New York call girl agency. Later she proceeded to invest USD 10,000 in purchasing the list of clients from a retiring New York madam.

Hollander has been invited to appear on TV talk shows in London and Paris as well as in Belgium and Holland or to give lectures to university and other groups. She became a member of the Speakers Academy in Rotterdam.
Society » Be a reporter: Write and send your article
Advertisement
Advertisement
Expats.bg All Are Welcome! Join Now!
More from Society