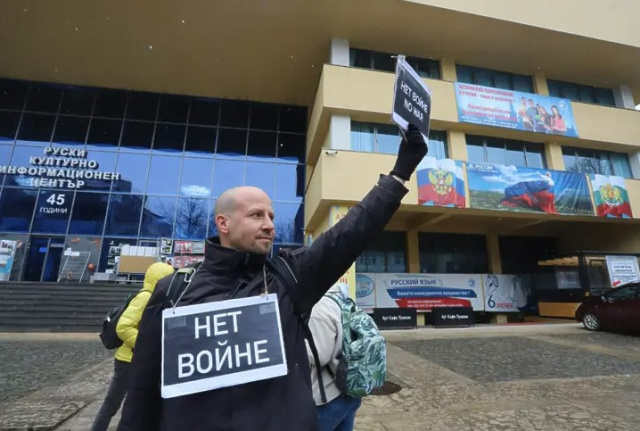 Anti-war protest by the movement "For Free Russia" in front of the Russian Cultural Center in Sofia, Bulgaria

The word "war" (voina/война) is the most frequently mentioned by Bulgarians in a large-scale study of the words that marked the past year 2022. This has been shown by the people's vote on the literacy platform "How is it written?" (Как се пише?). The words "inflation," "elections," and "Ukraine" were also among the most iconic last year, according to the poll.

After them in the top ten words are "gas", "volunteers", "insignificant interest", "refugees", "paper coalition" and "rucists". 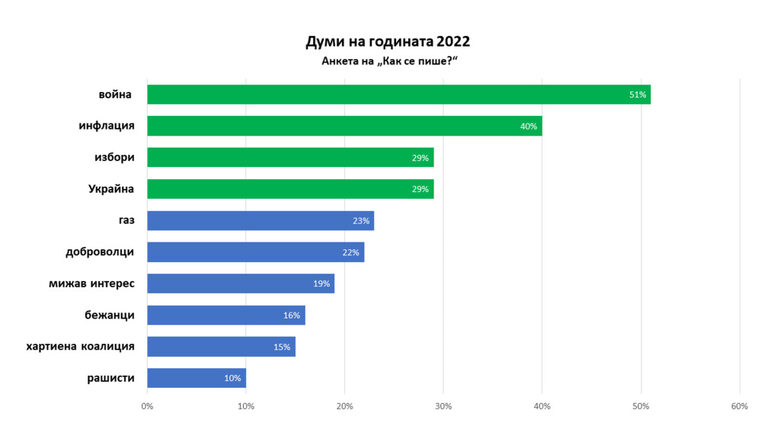 The study of attitudes among people was conducted in three stages. In the first - from January 4 to 11 - everyone had the opportunity to give their suggestions for words of the year on the "How is it written?" Facebook page. This time they were for 311 different words and expressions. In the second stage, from the 30 proposals with the most votes, a 5-member jury selected 10. Which 3 of them are the most important for Bulgarians as a society was chosen in a poll from January 16 to 21 in the third (last) stage, and each of the respondents had the opportunity to indicate up to three of the proposals.

The leader "war" has 51%, followed by "inflation" with 40 percent of voters, and in third place with 29% each are "elections" and "Ukraine". In the previous year, 2021, the first three places in the poll were the non-literary "judge" (pretsenyam/преценям), "anti-vaxxer" and "erase" (izchegartvane/изчегъртване).

The organizers of the initiative note that, in general, the words that people have proposed and chosen are unhappy and negative, but the shadow of war does not allow for a more cheerful mood. Still, there is a glimmer of hope in "volunteers" - the word that is ranked 6th by the survey participants, although the media has not launched it to such an extent, they also believe.

In the study of topics important to Bulgarian society, for the first time in Bulgaria, another component is included - a ranking of the most used words and expressions in the Bulgarian-language media.

The initiators of the campaign and the experts from Sensika are preparing more interesting samples from the reviewed 2,672,771 unique word forms published in the Bulgarian language media. The data will be released soon, they promise.