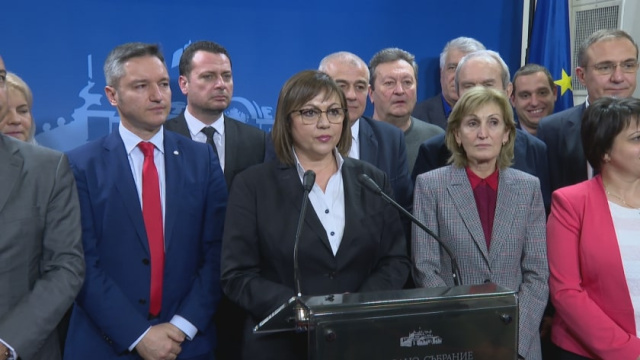 The Parliamentary Group of the Bulgarian Socialist Party gave a statement in parliament. "We brought out the most important priorities for Bulgaria and the Bulgarian people, which exist in the programs of all parties. We were looking for solutions to get out of the political crisis. We invited all the leaders of parties represented in the parliament for a conversation. We are returning the third mandate on Monday to the president," said the leader of the Left Kornelia Ninova.

"We remain open to conversations that are important for Bulgaria and the Bulgarian people with everyone. The responsibility lies with the first, the second and the third. But since the first and the second have failed, the responsibility should hardly be borne by the third. We have seen a coalition of the war (in Ukraine) consisting of ‘We Continue the Change’ and ‘Democratic Bulgaria’. We do not accept labels. Watch and judge us by our actions. We are going to elections, what will happen after them - the voters decide," said BSP leader Kornelia Ninova.

More from today's talks between BSP, GERB and DPS read here and here.