Kornelia Ninova after the Leadership meeting: Early Elections in Bulgaria are Now Inevitable 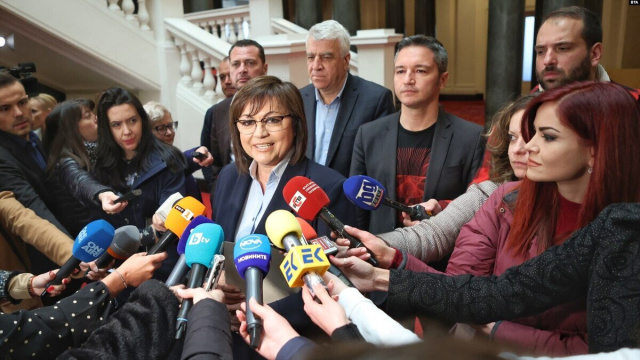 “Early elections are inevitable” - this is what BSP leader Kornelia Ninova said after the leadership meeting that took place in parliament. The conversation was between BSP, GERB, DPS and "Bulgarian Rise".

"We Continue the Change", "Democratic Bulgaria" and "Vazrazhdane" did not participate.

At the beginning of the meeting, Kornelia Ninova recalled that the president had given the Bulgarian Socialist Party the third mandate, because in difficult times BSP proved that they are a responsible party that seeks dialogue. She singled out four important issues – the Recovery Plan laws, the 2023 budget, our entry into Schengen and judicial reform.

"The people will suffer the most from the budget for the 2023 and it is clear from today's conversation that there is no support for forming a government, that is, we will go to elections and until June-July, we will leave the state without a budget. Okay, this is your will, we respect the decision of all parties. We are just trying as the mandate holder of the third term, which is in crisis, to do everything in our power. None of us have spoken to you about a coalition. You have not heard such a word because - Mr. Borissov mentioned a coalition".

The leader of GERB, Boyko Borissov, emphasized that there are no real obstacles and red lines for the formation of a government, but the decision of the GERB congress not to support a BSP mandate cannot be violated.

"I am convinced that we are going to elections for the fifth time. After the fifth, the same thing will be said again, if a similar format is not discussed in advance, how and in what way a new government can be structured. Now there is no way to support it , but I will discuss with colleagues such a ban, because BSP has also changed a lot, it should not be a brake for some kind of technical, expert, programmatic, whatever government at some point".

The leader of the DPS, Mustafa Karadayi, emphasized that we are going to another unnecessary early election because of the lack of dialogue between the parties in the parliament.

For Stefan Yanev from "Bulgarian Rise" this meeting is important, but late

"And to look for an intersection, so from our point of view, on behalf of "Bulgarian Rise", I would once again like to congratulate everyone present and declare that, in our opinion, this is the right approach: dialogue, dialogue and dialogue again."

This afternoon, the BSP Executive Bureau will decide whether there will be bilateral talks with the parties, which have not denied that they may talk to the BSP in a bilateral format. It will also be decided if and when the mandate will be returned.