Bulgaria: More Details regarding the Police Operation against the Cryptocurrency Company NEXO (UPDATED) 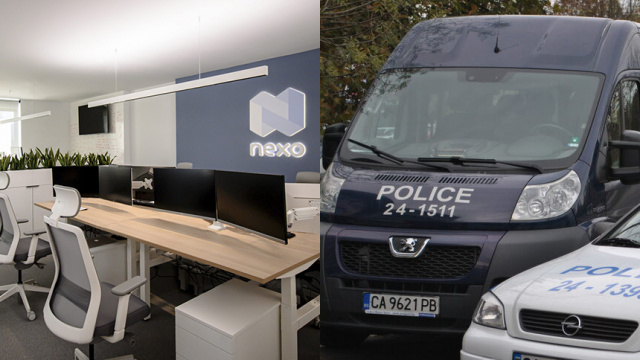 The spokesperson of the Bulgarian Prosecutor General Siika Mileva and the head of the "Cybercrime" department Svetlio Vasilev gave details about the special operation of the prosecutor's office, the National Investigation Service, the State Security Service and the Ministry of Internal Affairs against the cryptocurrency company NEXO.

“The main organizers and activities are in Bulgaria. 300 people are working on this operation, 35 investigators, employees of the National Security Service, the Gendarmerie and the Sofia Police. The pre-trial proceedings are under the supervision of the Sofia City Prosecutor's Office,” said the spokesperson of the Chief Prosecutor Siika Mileva.

Siika Mileva pointed out that for the last 5 years, a turnover of 94 billion dollars has passed through the platform. She added that among the clients of the platform is a person who finances terrorist acts.

“A client of the platform who transferred cryptocurrency has been officially declared an organizer of terrorist activity. It remains to be determined who will be charged with the crimes. More than 15 addresses are being searched, and new persons of interest are being established,” commented Svetlio Vasilev.

An international operation against a large-scale scheme for financial crimes, money laundering and violations of international sanctions against Russia is taking place in Sofia, BNT reported today.

Prosecutors, investigators from the National Investigation and SANS employees, together with foreign agents, have begun searches of the Bulgarian offices of the company that trades cryptocurrencies worldwide.

NEXO’s operations were carried out from the Bulgarian capital, and depositors were invited to invest in bitcoins and other types of cryptocurrencies, with promises of high returns.

In a series of posts on "Twitter", Nexo notes what measures they are taking against the prevention of money laundering. It also noted that "unfortunately, some regulators have taken a raid-first, ask-later approach." "In corrupt countries, this borders on racketeering, but this too shall pass," said one of the posts. Nexo noted that always have been cooperating with watchdogs and regulators, saying they hope to announce "exciting news" in the coming weeks.

After the beginning of the horrible war in Ukraine, the first order of business was to help fundraise for those affected https://t.co/VIceWt9y6j
The second was, of course, to comply with the sanctions, and Nexo took one of the most aggressive approaches here. 5/

Nexo was founded and managed by the Bulgarians Kosta Kantchev and Antoni Trenchev (former MP from the Reform Bloc political union). The business of the company, which was founded in 2017, is related to raising crypto-assets on deposit, on which it pays interest, and granting loans against collateral.

In September, Bulgarian media "Capital" wrote that the state of New York filed a lawsuit against the Nexo crypto platform. Officially, the indictment states that it is for "illegal operations and defrauding investors". At the same time, seven more US states announced legal action against Nexo. California, Vermont, Oklahoma, Kentucky, Washington, South Carolina and Maryland ordered the company to stop offering its deposit products in their territories.

Read more about the police operation against NEXO here.