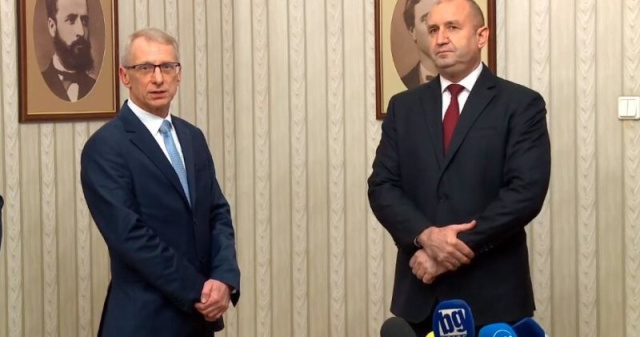 "We Continue the Change" returned to President Rumen Radev the unfulfilled second mandate to form a government.

"I am returning the folder with the unfulfilled mandate. Unfortunately, this list of national goals with priorities and tasks for their achievement did not receive sufficient political support, but I am sure that this effort was worth it. The negotiation, the discussion of where Bulgaria should develop in the coming months is yet to come," said Nikolay Denkov, nominated by “We Continue the Change” as candidate for prime minister, upon returning the unfulfilled mandate.

The head of state raised the question of the possibilities of forming a majority with the third, last mandate to form a government by asking the leadership of "We Continue the Change" if they could compromise with GERB.

"Yesterday, your coalition partners from ‘Democratic Bulgaria’ stated that the only way to form a government with the third mandate is if an agreement is reached between GERB and you. Therefore, I will ask you to discuss this extremely important issue," said Rumen Radev.

From what the party leaders said in the past days, it became clear that WCC is ready to talk about the third term with everyone. GERB leader Boyko Borissov proposes a new social contract. DPS believe that they are the most prepared party to implement such a mandate. According to "Vazrazhdane", new elections should come quickly.

BSP, on the other hand, will not support a cabinet with a mandate from DPS and "Vazrazhdane". According to "Democratic Bulgaria" it is now extremely important to have a government, but they say that WCC and GERB must come to an agreement. "Bulgarian Rise" is also ready to get the third mandate.