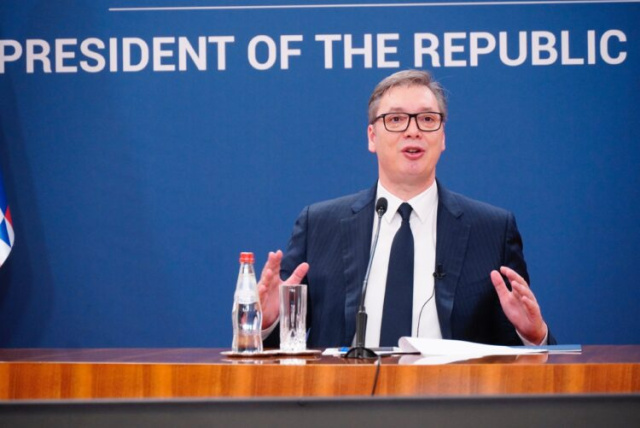 Serbian President Aleksandar Vucic said he does not want to change the country's constitution in order to remain in office for a third time in the next election, N1 reported.

Vucic went even further, declaring that "in the first half of next year" he would also give up the presidential post in the party. "This is my last term, I don't want to change the constitution, none of that."

"I have no need, nor do I want in any way to deceive or conceal facts from my people," he also said. Vucic won last year's presidential election with nearly 63 percent of the vote, although the result of his Serbian Progressive Party (SNS) was noticeably weaker (44 percent). At the same time, he signaled that it is possible that Serbia could go to new parliamentary elections, where the SNC - enjoying a much lower approval rating than his personal rating - would increase its support.

His words were part of an annual conference in the presidency, which he used to comment on other topics: Kosovo, Russia and Ukraine, expectations of a difficult year because of the war.

"We secured funds from our Arab friends"

He assured that, for now, Serbia can manage without the introduction of sanctions against Russia, membership in NATO and the European Union. "We took care of ourselves and secured funds at 3% (interest) from our Arab friends, we maintained full financial stability to secure energy sources whose future prices we did not know."

With the words about the funds from the "Arab friends", the president is most likely referring to the September visit to Abu Dhabi, which ensured the coverage of old debts through a loan with the same interest rate.

Belgrade, given its strong dependence on Russian gas, has refused to join the sanctions against Moscow over the war in Ukraine for now, despite frequent European calls to do so and discussions on the topic among the ruling party last year.

Vucic pointed out on the occasion of a post on Twitter by the opposition after a meeting with US Ambassador Christopher Hill that to see what would inspire American companies, it is enough to look at the roads: "More were built in 11 years than in the previous 67. If this is not enough for them and would not inspire them... To look for inspiration in the factories, because they closed factories for 400 thousand, and we opened for 230 thousand."

He also rejected the estimates of the European statistical agency Eurostat, according to which Serbia is the fourth poorest country in Europe in terms of gross domestic product per capita and standardized individual expenditure. According to him, Eurostat had something else in mind, because in Serbia no one worked for 250 euros, as stated, and the lowest salary was 370 euros. "When the facts don't match what you want to see, it is so much worse for the facts."