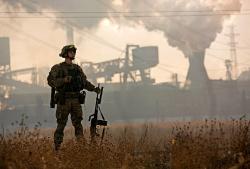 Russia's invasion of Ukraine, the protest movement in Iran, the abortion issue in the US - 2022 was rich in diverse events. AFP offered a list of the 10 events that, according to the agency, marked the world this year.

On February 24, Vladimir Putin ordered Russian troops to invade Ukraine, plunging the world into a crisis not seen since the end of World War II. In front of NATO countries that have pledged their support for Ukraine, the Russian president brandished the threat of nuclear weapons, saying he was ready to use all the means in his arsenal.

The war caused the biggest influx of refugees into Europe since the end of World War II and cost thousands of military and civilian lives.

Putin, who claims he wants to denazify Ukraine, has found himself very isolated diplomatically. Westerners have imposed economic sanctions on Russia that have tightened over time, while supplying arms to Ukraine, which has also been granted EU candidate status.

Witness accounts abound, accusing the Russian army of abuses, including the killing of civilians, torture, and rape.

At the very beginning of the invasion, the Russian military abandoned the encirclement of the capital, Kyiv, from where Ukrainian President Volodymyr Zelensky makes daily statements to world leaders to ask for their support.

The war also raised the threat of a global food crisis due to Russia's naval blockade of the Black Sea. An agreement reached in July allowed Ukraine to gradually begin exporting its abundant grain production.

In September, Putin announced the mobilization of 300,000 reservists and signed annexation documents for four occupied Ukrainian territories following referendums deemed by the international community to be mock referendums, while the Russian military has racked up battlefield setbacks.

After the withdrawal from the Kharkiv region, Moscow ordered the withdrawal of its forces from Kherson in early November. Russia has launched hundreds of punitive strikes against Ukraine's energy grid, plunging millions of Ukrainians into darkness as winter approaches.

Inflation fueled by the energy crisis

The surge in prices that began in 2021 due to disorganization in distribution chains, combined with strong demand for essential products and services after economies restarted post-Covid, has tripled this year to reach levels not seen in decades. Inflation is expected to reach 8 percent in the fourth quarter in G20 countries, weighing on economic growth around the world and causing a rise in the value of company output.

Inflation has been fueled by the war in Ukraine, which has plunged Europe into a deep energy crisis. Russia, under the blow of Western sanctions, multiplied punitive retaliatory measures and even hit the EU's weak point - its dependence on Russian gas. Exports of Russian gas, particularly to heavily dependent Germany and Italy, fell sharply.

"The world economy is experiencing its most serious energy crisis since the 1970s," emphasizes the Organization for Economic Development and Cooperation.

The war also led to an increase in the price of cereals and, accordingly, of animal feed.

Due to the ongoing restrictions related to Covid, the shortage of electronic chips, mainly manufactured in Taiwan, has also reverberated in many industries.

U-turn on abortion, low conservative wave in US midterm elections

In June, the U.S. Supreme Court gave back to each U.S. state the freedom to ban abortion on its territory, burying the landmark 1973 Roe v. Wade ruling. Since that reversal, twenty U.S. states have outlawed abortion altogether or severely restricted it, and this question emerged among the campaign topics of the midterm elections produced in November.

These midterm elections did not lead to the conservative wave expected by supporters of former US President Donald Trump. Democrats retained control of the Senate, and Republicans won a slim majority in the House of Representatives.

Trump has nevertheless announced his candidacy for the Republican presidential nomination for the 2024 election. The battle for that nomination is shaping up to be contested with several other potential candidates, including Florida Gov. Ron DeSantis, the rising star of the American right.

Former President Trump's candidacy could, however, be tainted by possible legal proceedings against him. In November, a special prosecutor was appointed to handle two of the many investigations against him.

Political instability and a new monarch in the United Kingdom

After a series of scandals and an avalanche of resignations in his government, Conservative Prime Minister Boris Johnson resigned in July. Liz Truss was officially nominated to succeed him in the post by Queen Elizabeth II. Two days later, the queen died after a 70-year reign. Two days after the date of her death on 8 September, on 10 September, Crown Prince Charles was proclaimed King Charles III.

Meanwhile, Truss became the shortest-serving British prime minister in the country's modern history. She lasted just 44 days in office before resigning in turn after sparking a political and financial crisis with her radical economic agenda.

Rishi Sunak came to power in late October during a period of unprecedented instability in the country. He is the fifth British Prime Minister since the Brexit referendum in 2016. Enormous challenges await the former banker and Chancellor of the Exchequer, who is only 42 years old. Among them are inflation exceeding 10 percent, a declining health care system…. And the end of the year was also marked by a series of strikes in the country.

The summer was the warmest ever recorded in Europe. Record temperatures and heatwaves triggered drought and dramatic fires that burned more than 660,000 hectares of forest between January and mid-August in the EU, a record. A record loss of ice mass was also recorded on the glaciers in the Alps.

At least 15,000 deaths were directly linked to the heat on the old continent, according to the World Health Organization.

China also broke heat records in August, and drought threatened the Horn of Africa with famine.

Fires and deforestation hit new records in the Brazilian Amazon.

In Pakistan, historic floods linked to unusually intense monsoon rains have killed more than 1,700 people and forced 8 million people from their homes, leaving a third of the country inundated.

If this year's forecasts are confirmed, the eight years from 2015 to 2022 will be the hottest ever recorded, the World Meteorological Organization warns.

After difficult negotiations, the UN climate conference ended on November 20 in Sharm el-Sheikh, Egypt, with a compromise on aid for poor countries affected by climate change, but also with a failure to set new, more ambitious targets on reducing greenhouse gas emissions. gases.

On September 16, Mahsa Amini, a 22-year-old Iranian Kurdish woman, died in hospital three days after she was arrested by the morality police, who accused her of violating the country's dress code requiring the wearing of the Islamic veil in public.

Her death sparked a wave of protests in Iran. They are unprecedented since the 1979 Islamic Revolution.

Protests for more women's freedoms have progressively turned into a wider movement against the Islamic regime, which has taken over the streets, universities and even schools despite repression. The authorities say more than 300 have been killed during the protests, but a Norway-based NGO says the number of victims is at least 448.

Chinese President Xi Jinping was re-elected in October as the head of the Chinese Communist Party at the 20th Party Congress. He surrounded himself with devoted allies to become the most powerful leader in modern China.

During his decade at the helm of his country, Xi demonstrated a desire for control, infiltrated almost all governance mechanisms and state structures, and became the subject of international criticism on human rights.

Tensions in the Taiwan Strait have reached their highest level in years since US House Speaker Nancy Pelosi's visit to Taiwan in early August. China responded with land and sea military maneuvers unprecedented since the mid-1990s. US President Joe Biden has said his military will defend Taiwan if China invades the island.

The country's zero-covid strategy, which led to lockdowns of entire neighborhoods or cities when outbreaks of infection appeared, sparked protests at the end of October on a scale not seen in decades. The authorities acted through repression against them, but also softened their sanitary policy.

Different fates of the far right

Lula, who was in prison on corruption charges (in 2018-2019) before his convictions were overturned by justice, will officially return to head the Brazilian state on January 1, 2023. His success appears to cement the return of the influence of the left in Latin America.

In Europe, by contrast, ultraconservatives have scored resounding gains in parliamentary elections in some countries, starting with the fourth consecutive victory for Hungarian nationalist leader Viktor Orban's party in April.

In France, Marine Le Pen's far-right National Assembly made a historic breakthrough in June, becoming the first opposition force in the National Assembly in which President Emmanuel Macron lost his absolute majority.

The nationalist and anti-immigrant Sweden Democrats party was the big winner in September's election, becoming the second largest political force in the country.

In Italy, Giorgia Meloni won a historic victory in September with her "Italian Brothers" party and was appointed prime minister in October.

Hope for peace in Ethiopia

After two years of conflict, Ethiopia's federal government and rebels from the Tigray region signed a cease-fire agreement in Pretoria on November 2 that should bring an end to a war described by NGOs as one of the world's bloodiest. The conflict, which since November 2020 has pitted Ethiopia, backed in particular by the forces of neighboring Eritrea, against rebel authorities in Tigray, has been marked by alleged crimes against humanity committed by all parties in it, according to the United Nations. The conflict has forced over 2 million Ethiopians to flee their homes.

In addition to disarming the rebels, the peace deal should in particular allow the delivery of humanitarian aid to Tigray, which is almost cut off from the world. Its 6 million inhabitants have been without food and medicine for more than a year. The first aid convoy since late August arrived there on 16 November.

Qatar - a criticized host of the World Cup

Entrusting the hosting and organization of the FIFA World Cup to Qatar (November 20 to December 18) has sparked an avalanche of criticism against the small Gulf country.

The fate of migrant workers - a staple in the country's machinery, where Qataris make up just 10 percent of the 3 million population - is being pointed at. Some media say thousands have died at the construction sites, an estimate Doha denies, saying it will take legal action against criticism coming from Western Europe.

Criticism of Qatar has also been expressed in other ways since the start of the World Cup, through symbolic gestures, such as that of German footballers pretending to be gagged or that of European ministers wearing armbands with the colors of the rainbow, a symbol of the LGBT+ community.