Bulgaria: DPS and Prof. Gabrovski - Unanimous on the Need for a Working Cabinet 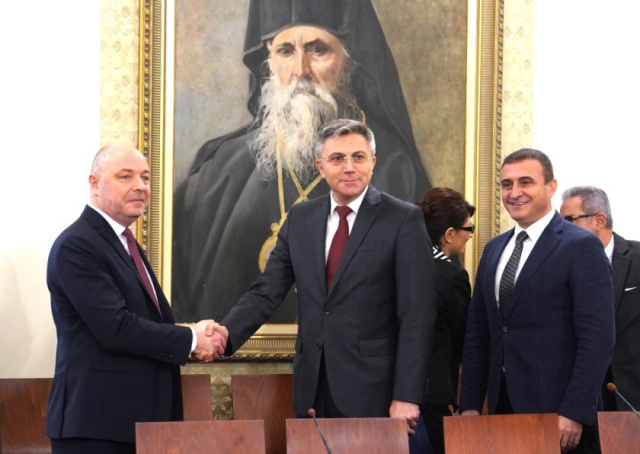 The candidate of GERB for Prime Minister, Prof. Nikolay Gabrovski met with representatives from the parliamentary group of the Movement for Rights and Freedoms (DPS). Before them, he presented his vision of forming a government with the first mandate.

"The task with which I am charged is quite difficult in this political situation. My wish is if we manage to build a team of professionals without a bright political color who can lead Bulgaria through these critical months in order to avoid entering into a new cycle of early elections. Because if we don't form a government now, there is a danger of next and subsequent elections," Gabrovski said.

"We would like to congratulate you on this responsibility that you are taking on in this critical situation for the country. A cursory glance at your biography says that you do not need the party-political confrontations that have become necessary in our country. On the political terrain, normality should be sought. For us, this is not a foreign topic. For us, normality passes through dialogue. In order to have a cabinet, for DPS, normality is an axiom, but in addition to the axioms, from then on we must also look for the formulas. That is why the program – and goals are a very important element for us, priorities, including the professional composition of the cabinet," said Karadayi.

Gabrovski replied that for the moment he could not disclose the personnel composition of the draft cabinet, but it would be made up of experts distant from the political parties. Outline and priorities - laws under the Recovery and Sustainability Plan, Schengen, the Eurozone, the fight against corruption.

"We must continue in the direction of a working parliament that, even if it sets only a few goals, has a horizon to fulfill them. As a citizen, I feel personally affected that we are separated into a separate group for Schengen. This is a signal that in our something is not right. For the Eurozone, where we are also missing deadlines, for me there is no doubt where our place is and which family we belong to. Every effort must be made. If we enter a cycle of early elections, the likelihood of a positive development for the Eurozone diminishes drastically," he pointed out.

Gabrovski once again emphasized his readiness to seek a constitutional majority in the 48th National Assembly to implement the judicial reform.

DPS defined the topic as "political chewing gum" and expressed doubt that the parties that point to it as a priority really want to do something about it.

"The changes in the Constitution and the powers of the Prosecutor General, many people use it as political chewing gum, but few people do anything or have done anything. From DPS, hearing many politicians who use the term ‘judicial reform’ to try to frame the National Assembly in the judicial system, we did our part - we drafted a draft of changes to the Constitution and provided it in black and white to each parliamentary group in the 47th National Assembly. And those who use the topic as political chewing gum, then we saw their actions - exactly zero, nothing! And we opened up an opportunity for dialogue. Apparently, for some of the political parties, the party-political exploitation of some topics is more important than their solution. So we have the same views on this topic, the question is which way to go. Whether someone is willing to walk the path is another matter," Karadayi pointed out.

On the subject of Schengen, he called for an analysis of the country's shortcomings in recent years. According to him, there was a lack of conversations, dialogue and united actions of Bulgarian politicians, institutions and diplomacy.

"With the frequent elections, the change of governments and the refusals to dialogue and talks on the important topics for the country, we reach such situations where we can hardly answer some questions. Regarding the recovery plan - there are some 60 billion that are sitting on stumps in Brussels and it is not known whether we will get them. In order for there to be three from the lotto, we have to run a ticket, and we have not signed the ticket," said Karadayi.

He called for efforts to ensure that the European funds reach the Bulgarian citizens. Gabrovski pointed out that DPS theses show that they think in the same direction on most things, but if there is a working government, they cannot be fulfilled. Earlier today, Prof. Gabrovski was supposed to speak with "We Continue the Change", but they did not come to the meeting. The "Vazrazhdane" party also sent a letter that they would not respond to the invitation.

Yesterday, Prof. Gabrovski met with representatives of "Democratic Bulgaria" and BSP, who declared that they would not support a cabinet with the first mandate. Only Stefan Yanev from "Bulgarian Rise" declared readiness for talks.