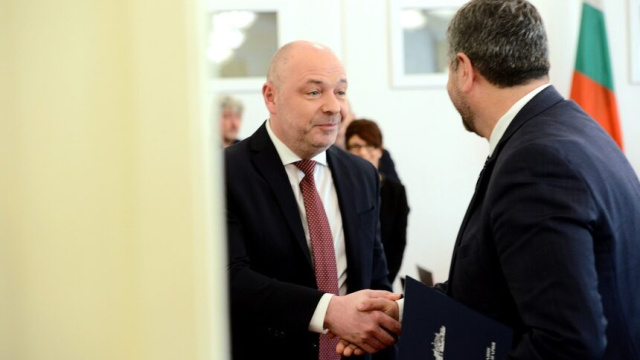 "Democratic Bulgaria" cannot support the first mandate to form a regular government. This was stated by the co-chairman of the party Hristo Ivanov during the first meeting with the GERB-SDS nominee for Prime Minister Prof. Nikolay Gabrovski.

Hristo Ivanov motivated the position with the decision of the collective bodies of the coalition.

In front of Nikolay Gabrovski, who was together with the deputy chairman of GERB Tomislav Donchev and the chairman of the PG of GERB-SDS Desislava Atanasova, Ivanov clarified, however, that if the mandate of GERB with candidate for prime minister Nikolay Gabrovski is successful, "Democratic Bulgaria" will be ready to work on specific topics on which the coalition has common views with GERB.

Nikolay Gabrovski, nominated for prime minister by GERB, stated that he is striving for a new approach in politics. He assured the representatives of "Democratic Bulgaria" that he would not compromise with the anti-corruption legislation. And he announced that he would seek a constitutional majority to create a mechanism to oversee the Prosecutor General.

Nikolay Gabrovski announced that a document for a government will be drawn up as soon as possible, indicating that it will include experts more distant from the various party structures, pointing out that some of the names are of undisputed reputation.